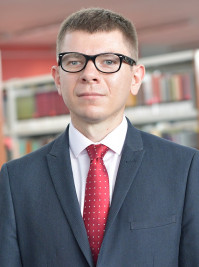 Our next guest of speaker series of Institute for Political Science is Filip Biały (Kazimierz Wielki University) with the presentation entitled:

Over the last decade, the development of new digital technologies has been transforming many different spheres of our individual and collective lives. Artificial intelligence, in a form of narrowly specialized, yet very powerful algorithms, has been used to process vast amounts of data, resulting not only in the change of the nature of economic, social and political processes but also raising worries related to undesirable implications of that change. Those worries have started to be addressed in multiple debates between various stakeholders, including technologists, corporate actors, governments and policy-makers, social scientists and philosophers.

It can be argued that political scientists, and especially political theorists, are yet to make their impact in those debates. What prevents them to do so is the complex nature of not only the technology in question but also of the very debates. To put it simply, it is not always easy to understand and follow a very heterogenous, quickly moving discourse on AI and algorithmization. At the same time, because of the fact that digital technologies touch on a broad range of politically important issues – from economic transformation to electoral manipulation and problems of governance –, contributions from political science and theory are desperately needed.

The primary aim of my presentation would be therefore to make sense of the ongoing debates. First, I will try to map out the discourses on ethical, social and political implications of AI. I will attempt to identify the most important questions, scattered among diverse communities that discuss them under many different labels, such as ethics of AI, algorithmic governance, AI safety, AI governance and policy. Second, I will set out my own methodological approach to those questions, focusing on a conceptual analysis of the fundamental political concepts, including autonomy, agency and legitimacy.

It has to be stressed that my presentation should be treated first and foremost as an invitation to a discussion that, hopefully, would result in the development of new ways of researching the political dimension of AI and algorithmization from the point of view of political theory.