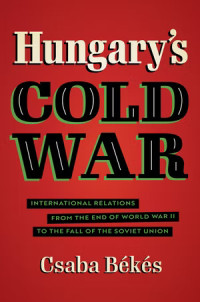 In this magisterial and pathbreaking work, Csaba Békés shares decades of his research to provide a sweeping examination of Hungary’s international relations with both the Soviet Bloc and the West from the end of World War II to the dissolution of the Soviet Union in 1991. Unlike many studies of the global Cold War that focus on East-West relationships—often from the vantage point of the West—Békés grounds his work in the East, drawing on little-used, non-English sources. As such, he offers a new and sweeping Cold War narrative using Hungary as a case study, demonstrating that the East-Central European states have played a much more important role in shaping both the Soviet bloc's overall policy and the East-West relationship than previously assumed. Similarly, he shows how the relationship between Moscow and its allies, as well as among the bloc countries, was much more complex than it appeared to most observers in the East and the West alike.

“Békés offers an original and at times provocative view of Cold War history from a Central European/Hungarian perspective that diverges from most accounts and makes significant contributions, in both arguments and evidence, to existing scholarship.”—James Hershberg, George Washington University

“Békés provides a host of theoretical innovations and novel interpretations as he recounts how Hungary both experienced and emerged from the Cold War. Drawing on his thirty years of work on the subject, Békés brings the history of this state at the fulcrum of Europe alive.”—Mary Elise Sarotte, author of Not One Inch: America, Russia, and the Making of Post–Cold War Stalemate